Printmaking is one of my favourite things to do, especially etching. However, for a little while it has taken a back seat to my drawing and painting. But I have recently again picked it up as I wanted to create some large single prints. The process of etching and printing the etch takes a long time which is why I enjoy it. There is a sense and feeling of accomplishment that you do not get from anything else. Also, the process is an important part of my practice so I felt that it marries together well.

First thing is to file the steel plate to get rid of the sharp edges so that it does not cut into the printing blankets otherwise they would be ruined. Although it may not look so difficult, it is harder than one may think. When it is a small plate it is quite quick and easy but considering that the plate I used is quite big (approx. 1mX1m), everything takes a lot more time and effort than it would if it was small. 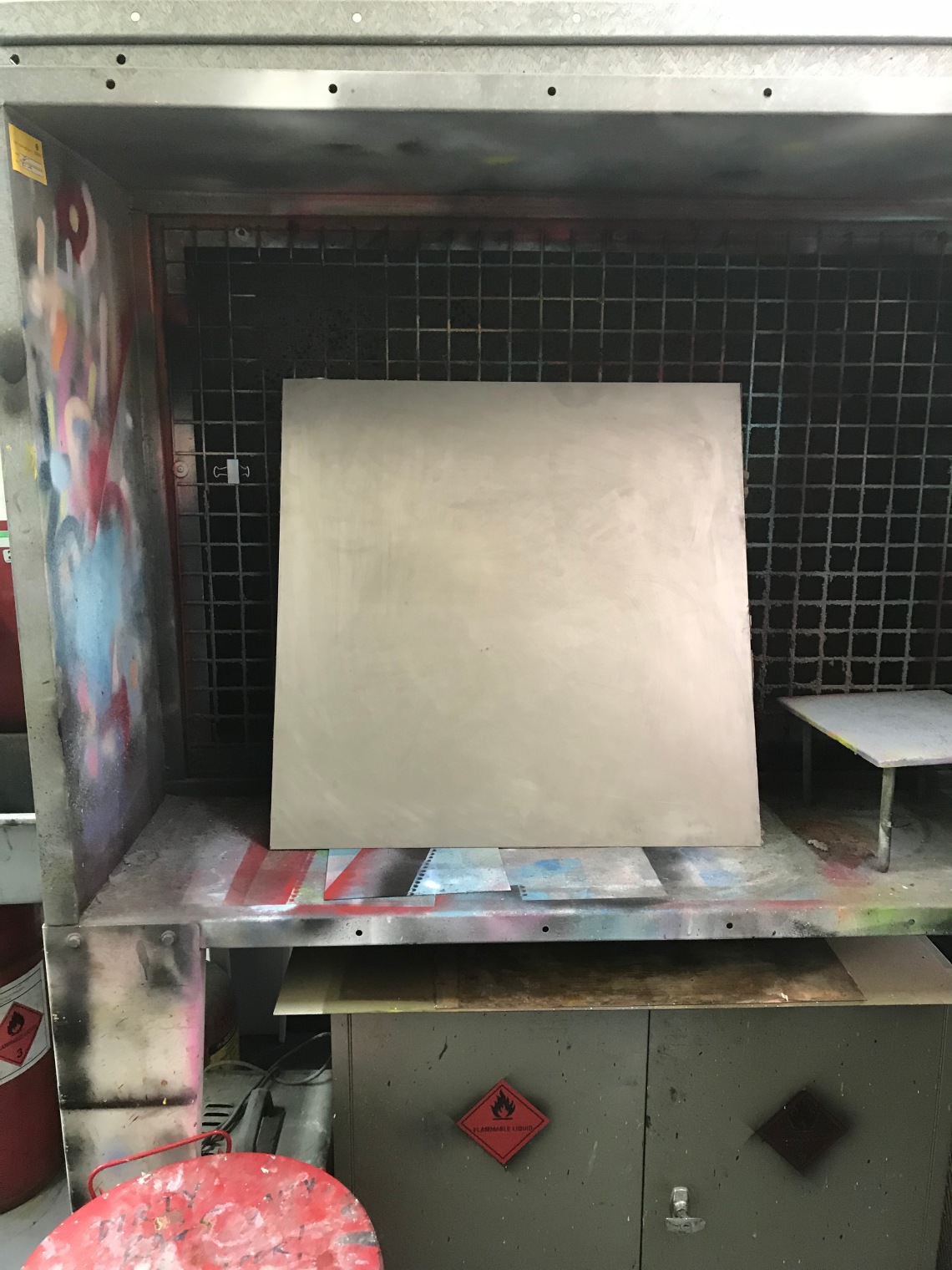 The next stage is to prepare the plate for the etching process. To do this, I used warm water, whiting powder and sandpaper to clean the surface from grease. If it is greasy still, then the plate will not be able to hold the ground/ink.

However for me, it was not as important because I was using aqua tint to create a large surface area of darkness. I had done this before but only in a small version and I enjoyed the texture that was created – it is not easy to tell that it is an etching which is what I found interesting – not being able to tell what the process might be adds another layer to the work ad the viewer does not know how it is done – almost like some deep, dark magic in a way. 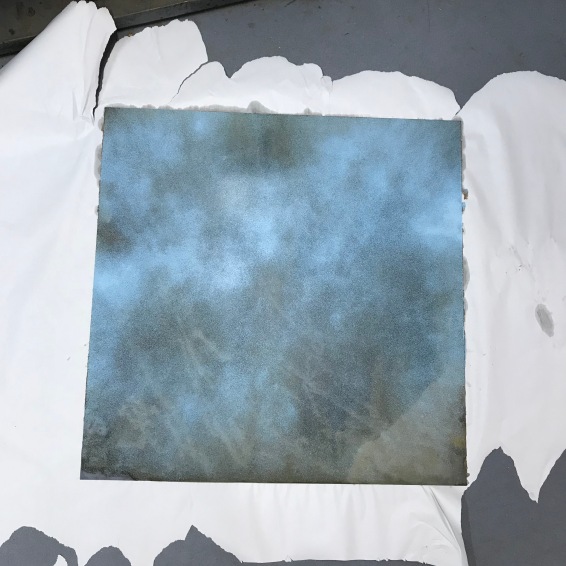 The next stage is to spray the plate with some aqua tint which is a lot fancier than it sounds. It is just a layer of spray paint. The reason this is done is because the little spaces of metal in between the plate will be etching but the parts with the spray paint will remain. This means that the bits that are etched will be able to hold the ink, where as if there was no paint, the whole plate would just etch and it would etch through – there would be nothing for the ink to hold onto.

The plate then goes into the acid (nitric acid), for this plate I needed about 11litres of diluted acid. The longer that the plate is left in the acid the darker and stronger the etch would be because the acid has had more time to erode the steel. I left the plate in for just over 2 hours and checked on it, disturbing the acid about every 15 minutes or so. If the acid had not been disturbed so much, there was a chance that the place could have a small explosion because there was so much acid and such a big steel plate – this could have happened but thank goodness it did not!

Once the plate is dry and clean from the acid, it is time to start printing. First things first is to ink the plate up and of course I am using black ink. The aim of these prints were to create different textures and different densities of darkness. Once they ink has been lathered on, it then has to be removed again with a scrim. Moving in circular motions the scrim eventually gets rid of the excess ink on the plate. Whilst this part of the process is happening, there should also be some of the paper in the wet paper tray to soak.

This part of the process is probably the hardest part and it probably does not help that I am little. The plate goes onto the press, and then the soaked paper is placed on top (not too soaking otherwise everything will end up super wet and that is not good). Then the protective blankets are put and then the work out begins. Have to turn and turn the wheel until it is through at the other side. Because the plate was so big, I did struggle with patience when turning the wheel as I just wanted to see the prints as quick as possible as turning the wheel is very labour intensive (to say the least!).

The process of printmaking is to be able to replicate the same image/print again and again, perhaps for selling or to get information across like newspapers etc. However, like I mentioned in previous posts, I don’t want there to be anything the same. I want it all different so that it cannot be replicated. It is distinctly created by me and no one could do the exact same because they are not me. Just the same as it would be if a colleague created a drawing, no one else could create that exact same drawing because it has came from their own minds and their own hands.

In this experiment for trying out etching in a bigger scale, I did find it rather tricky and VERY time consuming but that is okay. I think if I was more prepared in terms of having enough paper that is big enough, and little things like this it would have been more successful than what it was. Although, I did get some prints out of it that I shall be using as part of the ongoing installation of my studio space – so there is always some goo dout of the bad.